I’ve been using the Medtronic Minimed 670G insulin pump in auto mode for 20 days now.  I’m a new insulin pump user (I switched from doing Multiple Daily Injections) and my insulin pump trainer set me up with auto mode after using my pump for one week.

On auto mode, the 670G changes the basal rate automatically based on the Guardian 3 CGM sensor reading.  It tries to maintain a glucose level of 120 mg/dL.

The basal rate is represented as a series of purple dots above the graph.  As you can see in the following pictures, the pump decides when to reduce my basal rate (fewer purple dots) and sometimes will even turn it off completely.  When my blood glucose increases, it will increase the basal rate.

I’ve found that by optimizing the timing and amount of the bolus insulin, I can take advantage of this insulin pump’s “brain” and get flat lines for long parts of the day!!

I feel that this auto mode is a perfect fit for my relatively low carb diet (~150 carbs a day) and my low insulin needs (~19 units a day).

I ate meatloaf and potatoes.  My blood glucose was going low before dinner, so the pump automatically suspended the basal rate.  Since I’m in auto mode, it didn’t alert me, because it was able to keep my blood glucose around 120 mg/dl automatically.  I just can see that it wasn’t giving me basal insulin because there is a large gap in the purple dots that appear above the graph.

Around 5:30, I gave myself a pre-meal bolus.  You can see the yellow fork and knife symbol at the bottom of the graph.  Because my glucose was already in the normal range, and because I was going to eat a high fat meal which delays glucose release from the food, I actually didn’t do this bolus more than a couple of minutes before eating.

As you can see, the basal rate didn’t run while this bolus insulin was working and the basal rate really started up as my glucose began to rise about an hour after eating. 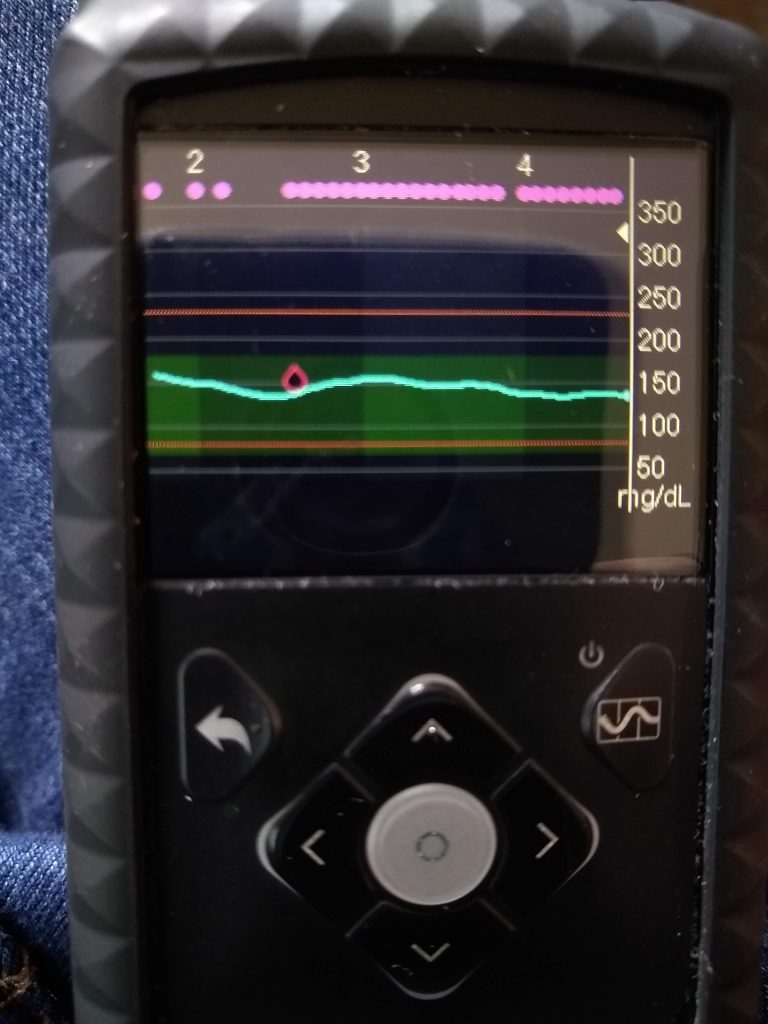 See the blood drop on the graph?  That’s when I tested my blood glucose and calibrated the CGM sensor.  This Minimed 670G System using a Guardian 3 Sensor which requires calibrations between 2-4x a day.  I usually calibrate when I first wake up, before lunch, and at bedtime.  Often, at bedtime, my blood glucose will be high, and the pump will suggest a bolus correction dose.  It’s very good at getting that dosage correct, and it’s amazing to wake up in the morning with glucose around 120-130 mg/dl!   The correction dose, in my case, is sometimes very small, like 0.1 to 0.3 units of insulin.   A small amount of insulin has a large effect on me, and I could never make these corrections with doing insulin injections, since the smallest amount I could inject was 0.5 unit. 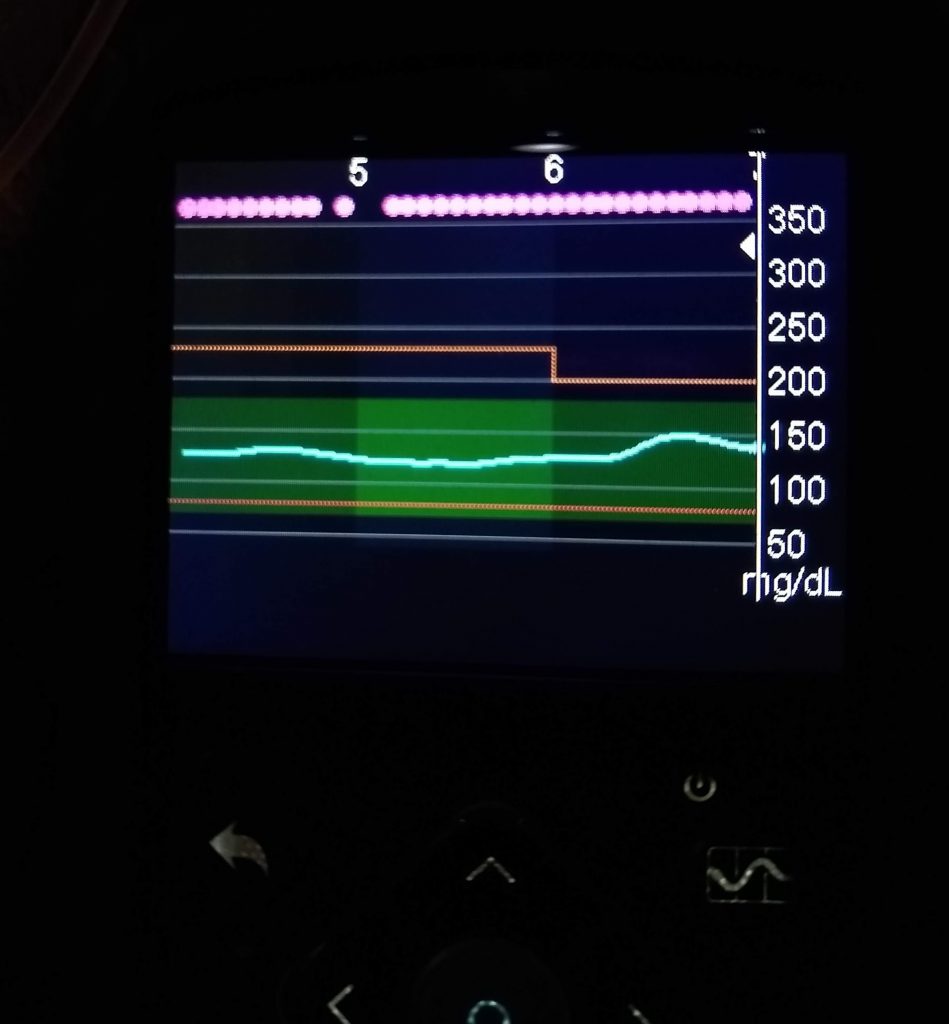 The above insulin pump graph shows that in auto mode, the pump’s basal rate was able to effectively control the normal rise in my blood glucose levels that happens after waking up.  I’ll admit, that some mornings I “cheat” by telling the pump that I’m having 5 grams of carbs and then I don’t really eat them until later (if at all).  Programming in “Phantom carbs” allows me to get it a bit lower than it would do on its own.

How I Interact with my Insulin Pump 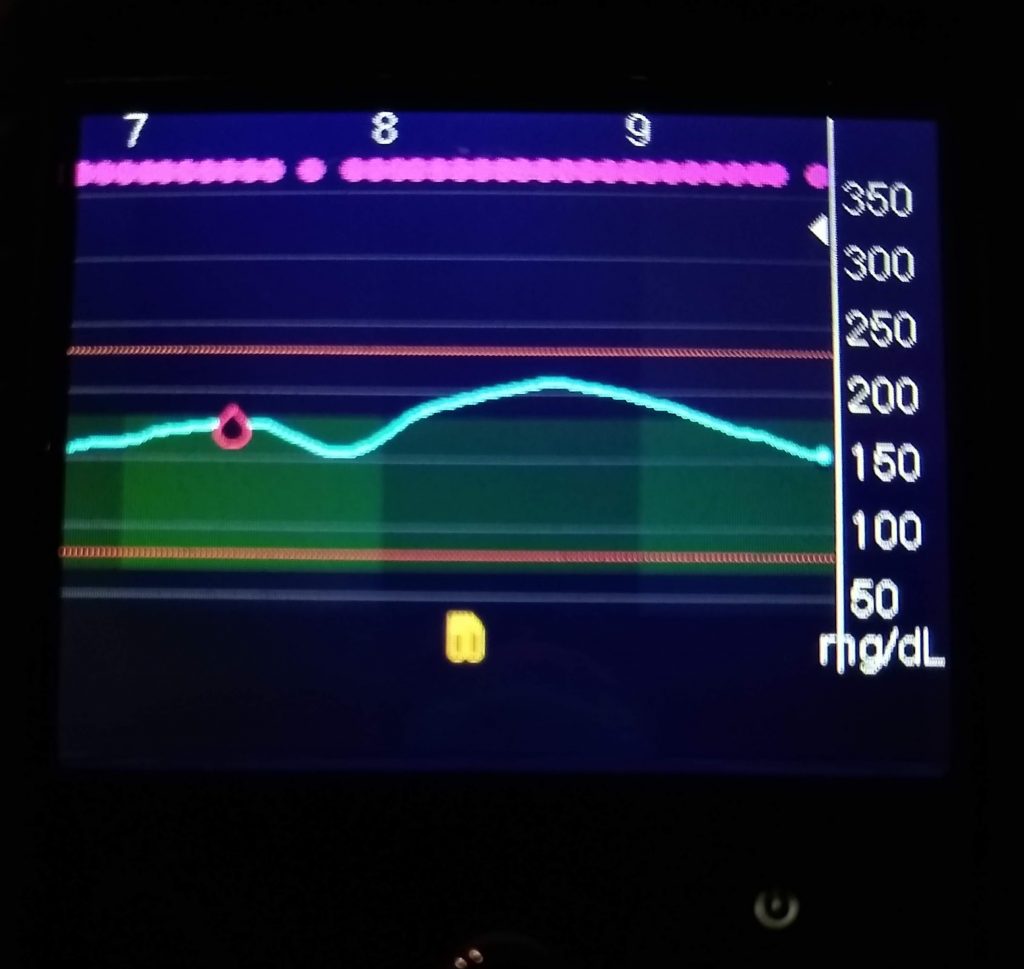 As you can tell, I’m quite happy with the results in general.  But, sometimes it doesn’t work out perfectly.  There are still periods where my glucose is higher than I’d like, and the occasional low blood glucose event too.

Most amazing things about this pump

What could be better

Stock up on Supplies

Get a back up glucose meter